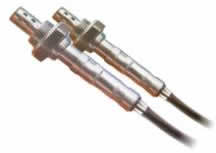 The sensor has to endure harsh conditions in hot exhaust gases, and in time it will wear out, just like other vehicle engine components wear out, such as spark plugs.

You may hear the Lambda Sensor referenced to by other names too, such as:

The sensor contains various precious metals, and can be contaminated by fuel or oil, carbon (a combustion by-product), or anti-freeze. If as a result of this contamination or of other internal problems the lambda sensor is worn out or damaged, the ECU will receive incorrect information from the sensor, and engine performance will suffer. Emissions of harmful gases from the exhaust will also increase.

Below is a block diagram of how the Lambda sensor fits into car's fuel system. The blue sensor represents a 'rear sensor', also known as a 'downstream sensor' or (in the States) a 'Sub-Oxygen' sensor. European vehicles got the rear sensor mostly only to vehicles made after the year 2000. Some Japanese vehicles have had rear sensors since 1990. This second lambda sensor gives the ECU an indication of how well the catalytic converter is working. These vehicles have 'OBD II'.

OBD stands for 'On Board Diagnostics'. In order to comply with the OBD II regulations, the ECU has to be able, amongst other things, to identify a failing catalytic convertor. It can do this by checking the signal received from the second sensor. There is a separate section with more on catalytic converters later.